Autographed 9″ x 7″ vintage press photo of Steve Belloise, of New York,  landing a shot to the face of Robert Villemain, French Middleweight, during the fifth round of their fight at Madison Square Garden on January 7, 1949. Belloise went on to win with a ten round decision. Photo is inscribed to Vince,(Handley)  Best Wishes, Steve Belloise. Photo is in good condition with a horizontal crease on top of photo and also some other sporadic creasing, as pictured. Press stamp and caption are on back of photo. 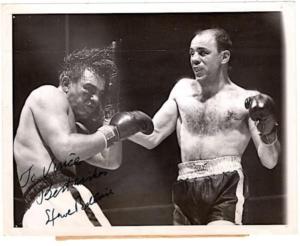 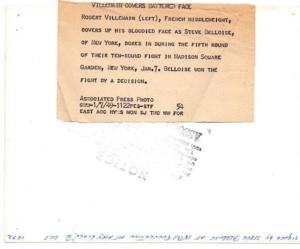